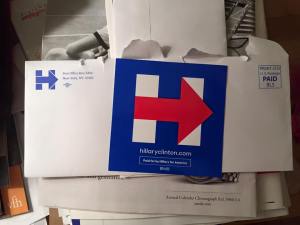 Received this Hillary sticker in the mail today, a (little late) token for my HRC campaign donation. The same day the electoral college has officially voted for Donald Trump to be our president.

I am an activist who feels dissent and resistance deep in my bones. But there are moments when I see no beauty in the resistance. There are only sick people without health insurance. Black and brown people without access to the vote. Women with bodies subjugated to the judgment of men who know nothing about us.

Sometimes we – or at least I – need to sit with that. Sit as still as we can be, not fighting the grief with optimism or qualifications. There are moments in which we have the sacred obligation to witness the world that is.

And I just finished reading Lindy West‘s memoir Shrill, and it concludes thusly: